Can You Tell What it is Yet? 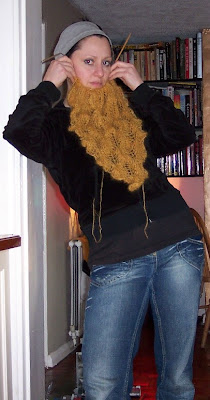 Yes, I am knitting a large ginger beard. Not really. Here is (are?) the beginnings of one of my twin shawls. This was after only a couple of days, and before I was distracted by some hand-painted Opal sock yarn. I have now knitted three-quarters of a sock, but cannot report further progress on either shawl.

I am now unable to put my sock down and will most likely finish it before picking up on the shawls again. Here is the sock (a couple of days ago): 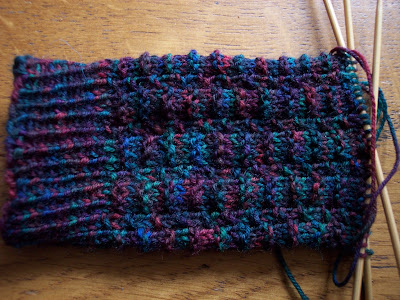 The stitch is Stansfield #10 from Sensational Knitted Socks. The colourway is Midsummer Night's Dream. The colours are so much darker than I expected - nothing like the bright colours in the photo, but this happens, I suppose. Sometimes it takes something like this to make you realise what it is that really pleases you. These dark colours are quite striking if you look at them close-up, but I now know for certain that I prefer something lighter (not usually pastel, though), brighter and - dare I say it - more feminine.

I had trouble deciding which stitch to knit the socks in, too. About ten rows in, I still wasn't very happy with Stansfield #10. I don't know why. Maybe it's too austere when combined with this colourway. Thing is, though it's not making my heart flutter, I do feel the pattern shows the yarn off quite nicely. This yarn is lovely to knit with - it's all springy and has a lot of body. I do really like it, but can't help feeling that the yarn and pattern combined were really meant for a man. And not a flibbertygibbet thing like me.

Soon, I will tell you about the shawls, and the "issues" I have. Oh, things just aren't tickety-boo knitting-wise, at present. I feel as though I've made some errors of judgement. However, as all knitting is good knitting, and, it's the journey that counts, etc., it's okay.

Before I go, I am so ashamed of not thanking you all for your lovely comments on my Edwardian wotsit. So, thank you, all of you. 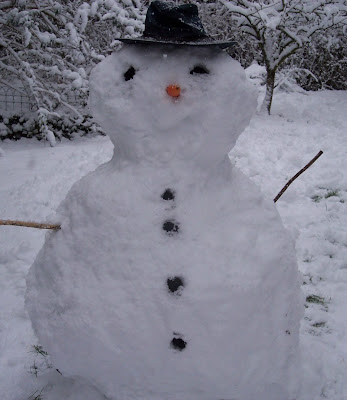 The Snowman, built at 8:30 this morning. 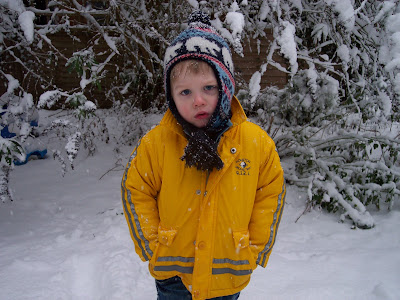 Charles, with a black eye. That's what comes of throwing a wooden brick at the wall, and it bouncing back at you. 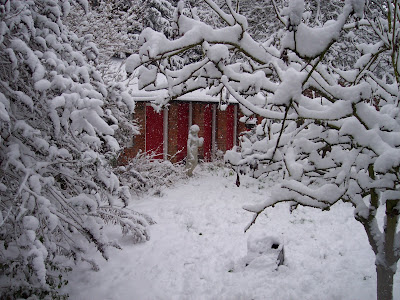 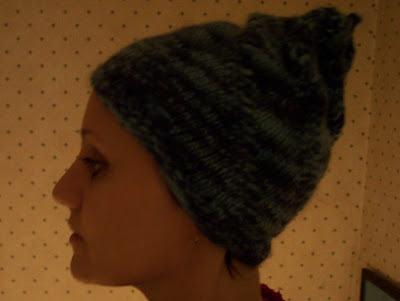 Here is the hat I knitted for Charles, in Twilley's Freedom Wool, colour Ocean. How quick this was! I knitted it on much smaller needles than called for, as it was meant for a three-year-old. It worked, and the fabric is so dense that it couldn't fail to keep you toasty. Thing is, Charlie will not, absolutely will not, wear it. I tried the same tricks as I used when I knitted the blue Odessa...."it's a train-driver hat"......"it's a Thunderbirds skiing hat", etc. It did not work and he cries real tears if I even look at him with intent whilst holding it. I have the same problem with the knee-high blue socks I knitted. It's weird. He will wear the Lana Grossa socks. They are softer, but I wouldn't say the Opal ones are too rough. I think children just decide something and they stick with it out of principle and not for any good reason. 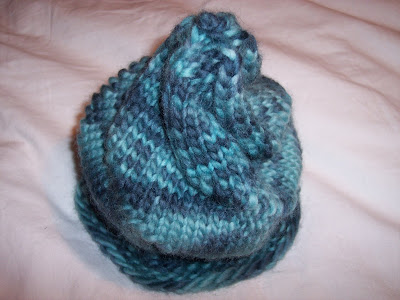 But never mind - I have already worn this hat a couple of times and I love it. I may knit another in PINK (you know how I love pink (but not baby pink), though I only realised it after knitting everything in pink without even noticing).

Sorry, the photos were taken in the dark.

I have started not one, but two shawls (and both the same ) and will enlighten you soon. 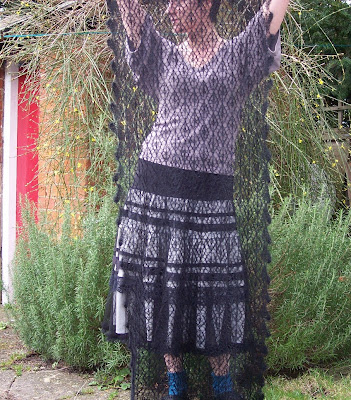 .......not just the Edwardian Lace Stole, but a photo in which I am smiling!! At long last. Indeed. 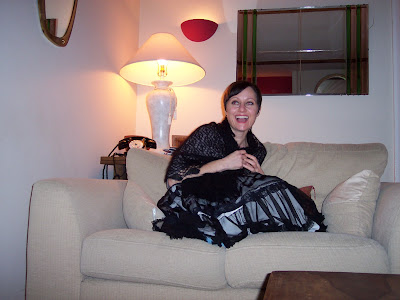 First - I know, I'm wearing that skirt again. It's my comfy skirt and I wear it all the time. And yes, with handknitted socks and clogs. So, that's out of the way.

Here is the Edwardian Lace Stole, from Heirloom Lace. It really is divine, though how useful it will be, I'm not sure. But is that the point of knitting - to make useful things? Not wholly, I think. But that's another story.

I could have knitted this stole in a month or so. Each repeat didn't take long at all - there are twenty-eight, so even if I'd knitted one a day, it would only have been a month. But six......... As I mentioned before, I just got bored with it. If it had been a sweater that I was looking forward to wearing, maybe I'd have hurried along a bit. The pattern was easy, though I had to get my head round the provisional cast-on and picking up the stitches from it, in order to knit the second half. It wasn't that this was difficult, it was more making sure I understood the directions. I have to say, whenever I had any kind of query, Sharon Miller at Heirloom was wonderful at helping out.

The really horrid bit of lace knitting is the blocking. How do people make it look so easy? I mean, they show a photo of their blocking in progress, and it all looks so perfect and even. I tell you, my attempt looked nothing like that. The edges weren't even - honestly, it was NOT a regular rectangle, as it tapered towards one end. I could not seem to manipulate the yarn to do exactly what I wanted. Maybe I was trying to stretch it too much width-ways to start off with and the yarn just had no more left to give when I reached the other end. I couldn't get the bloomin ends to match, and the pins had a life of their own: they kept popping out all over the place. And I'm impatient. Having washed the stole and throttled the life out of it, and then wrapped it in a towel and jumped on it a few times, it was pretty dry when I started pinning it out. So, after pinning for AGES, I gave it a quick blast with my most scary hairdrier and promptly unpinned it and tossed it over my shoulders. Bob's your uncle. Next time I am not attempting to block a lace ANYTHING without special, special wires.

I have another lace shawl to knit, in the KSH again. It's the Dove Shawl, and I've had the pattern since September. Will post a photo of it soon, though I think some of you may have come across it already. I'm fully expecting to take a long time knitting it, as I find the rows and rows of the same pattern repeats quite monotonous.

Thanks for the suggestions for Charlie's hat. I ordered some Twilley's in Ocean as soon as Jo mentioned it. Thanks Jo. And thanks Frankie, I looked at the Colinette after the event and like the look of it, so will try that out soon.

Friendsheep, the reason I'm so on track with my ufos, is that I don't have any new yarn to start anything else with. I've even had the KSH for the Dove Shawl since September!