I Should Be Doing Something About the State of My House... 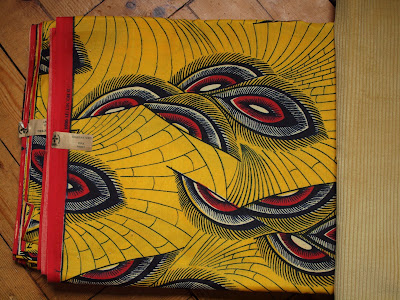 But so far this morning I have cut out the pieces for a shirt, and faffed around a bit doing Nothing.

However (don't faint) I made a dress yesterday. Just as threatened in my last post, it was the DKNY Vogue 2091, cap-sleeve, slash-neck one I made before in white, but that photo has disappeared. Anyway...on a whim I suddenly (and I do really mean that) somehow cut out the black lycra I had washed and prepared last July (yes, it's true) and got to work. This was at about 1pm and by 7:30 it was all done. I really really like this dress to wear, but seriously, I still cannot work out how the devil those little cap sleeves are supposed to be inserted at the bottom af the armscye. It took me ages of "doing my own thing" to get them to look right and I still have no idea what on earth the pattern is going on about (how to do it properly, in other words). Luckily it looks okay. If it didn't, I wouldn't be able to wear it, even if nobody else knew...it's just the way I am.

Unlike the last time, I didn't sew the side-tucks down and I'm not too sure if I like them loose. Maybe I prefer them looking more defined. Time will tell. Sorry the photo is so bad - I know it's grainy and you can't see any details properly. If you click on it, it will go clearer. Black is terrible to photograph, isn't it?

I SO have more lycra in my cupboard from which I can make more and more of these dresses but I fear that my friends will start to notice that I only have one style of dress to wear these days, not that it would surprise them. 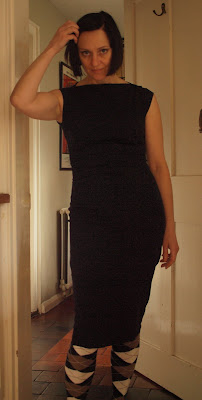 The fabric in the top pic is some cotton, handprinted (with wax, does that make it a Batik?). I got ten metres of the stuff for £5 from a market in Oxford. It's very light in weight and the weave is quite open. It frays like crazy. I've cut out the pieces for a shirt, so wish me luck! Oh, and the fabric to the right is some chunky cord, which I will make a short skirt from (denim style, you know).

Oh Dear, I Seem to Have Done it Again 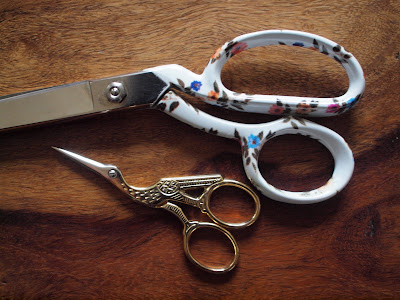 It seems like five minutes have passed since my last post, but all the evidence confirms it has actually been about five months...good grief!

On the sewing side of things, apart from making some buttonholes on a top, and sewing the buttons on, I haven't actually done any sewing at all since the end of July. I know this, as I bought some new scissors around then, and have never used them (there they are, above).

I did finish the black silk top I had started (will try to photograph it when the light is right), and I continued to finish it with a few simple couture (apparently) techniques, such as oversewing every single seam and edge by hand, and sewing in the pleats along the neckline by hand, too. I must say, it was very satisfying indeed, though it took ages and ages to do. The result is a lot flatter than finishing edges by oversewing on my machine, or turning under twice in order to make a hem. I don't think I'll be employing these techniques as a matter of routine, though, as it just takes so much time. When the fabric calls for it, then I'll bear it in mind. Otherwise, I think finishing edges with tape might be a good, neat idea, and not too time-consuming. However, be warned, knowing me I'll not bother at all and then regret it and feel inadequate when it all starts fraying!

I really mean to cut out another DKNY dress like the white one I made before. It turns out I really love this dress (unexpectedly) and NEED another one. I washed and prepared the fabric at the end of last summer but never got around to cutting it out. That is how lazy I can be, getting around to things. I look a bit more strea,lined around the middle since taking up Ashtanga in July (I practise every day, to one extent or another).

I have been pre-occupied with sorting out the details of our new kitchen extension, which I mentioned before. Now it's more pressing as I know it's really really happening (probably in June) and I need to get stuff decided and ordered. It's a sharp learning curve but I'm enjoying it. I'll share some of the details at some point.

OH NO! I JUST DELETED SOME PHOTOS FROM MY PHOTOBUCKET ACCOUNT, THINKING I'D TIDY IT UP A BIT AND, OF COURSE, THEY'VE DISAPPEARED FROM MY BLOG. GRRRRRRRRRR. SORRY ABOUT THAT!