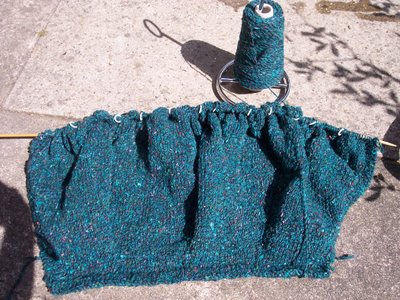 Having decided to go ahead and get started on the Glamour Cape, I ordered 960m of yarn ("Storm" in the jade colourway) from Texere, at the bargain price of £1.90 per 240m. I am a little suspicious of anything being sold at "bargain" prices, as it's normally a false economy, the truth being, sadly, that you get what you pay for. That's why I normally prefer to spend huge amounts on Noro and the like. I know what I'm getting and I like it.

So, my bargain yarn arrives and I rip open the package to be greeted by the first warning sign - the smell, a sort of woolly smell, but more like wool mixed with some kind of chemical. Then, I touch it and it feels like I could knit a lovely mat with it. A really tough sort of mat. True, the colour is lovely, much more green than these photos suggest, and there are flecks of all colours running through it, together with a thread of black which is twisted along the whole length of the yarn. Dismayed but not deterred I wondered if washing it might disguise the smell and soften it up and a quick dunk in Fairy Bio and Comfort really did perform an almost-miracle. The test swatch came out feeling soft and pliable, smelling completely divine and looking fluffy like a dog that's just had its annual shampoo. 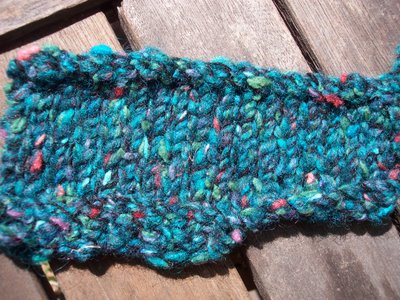 Nevertheless each row is now 330 stitches and rising by 30 more every fourth row, and this yarn (still in its disgusting, smelly, mat-like state) is killing my fingers. No kidding, it's hard work and now I know what people mean when they say "oh, this yarn, it knits itself", or "it feels like butter". Because that's what I've always knitted with before and never appreciated. I can put up with this as long as the finished item is wearable. But can my washing and blocking skills manage such a heavy and large garment (without completely ruining it)?

The pattern is so easy - I was mistaken in thinking I'd need assistance. And I've knitted my first hem with three needles. Oh boy, that was so satisfying I want to do it again. It remains to be seen whether the cape will ever fit, due to having hardly stuck to the pattern where numbers of stitches are concerned. But we'll see. I'll show you the finished article however it turns out. One thing is for certain: if it turns out well it will have been such a bargain at less than £8.00!

Added a few hours later: How could I have been so rude as to forget to thank you all for your much-appreciateed comments on Ella? Thanks to everyone!